We really appreciate the amount of valuable feedback we get from attendees following each event. We ensure to personally read every single submission and take them into consideration when planning our next event. We’d like to take this opportunity to allow some of our Team Leaders to respond to this feedback and show you how we plan to improve. 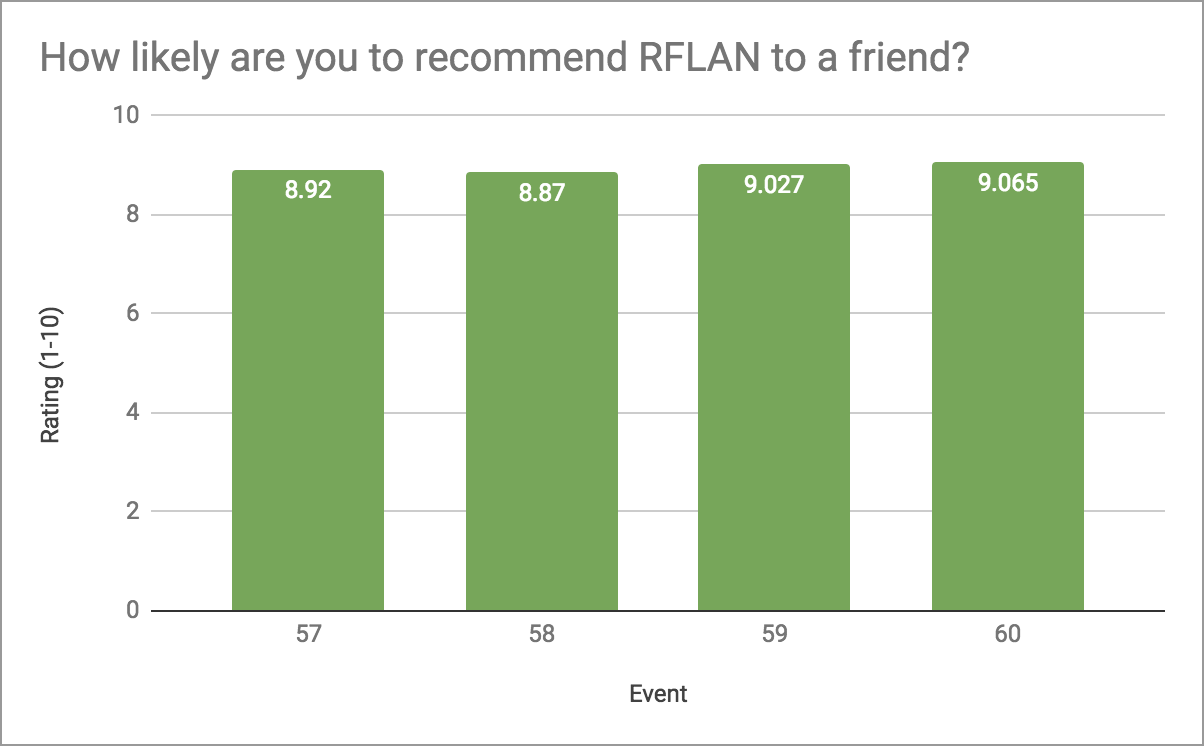 Over the past four events, we’ve continually managed to improve the overall event for our attendees – this is afterall the whole reason we run events!!

As always RFLAN was a great social event where i was able to meet up with mates that i have never met in person. Keep up the awesome work and doing what you guys do best 🙂

Our greatest focus is on the enjoyment others have during our events, to be able to have the ability to socialise with friends and others is what makes us a community. We are very happy to hear that you had a great and amazing time at our events! We also thank you for your motivation and we will keep working to be even better. – Nathan (Red Team)

AFK beanbag area outside was a fantastic atmosphere at night with the dj and smell of coffee.

We’re very glad the AFK area was such a success. Given the ever reducing amount of space in the auditorium, we wanted to ensure there was an area for lanners to relax and chill away from the intensity of the tournaments etc. It clearly worked by the amount of RF staff found chilling in the bean bag area! – Liam (Games Team)

We were all very excited to meet him in person and we have to thank Corsair for flying him over to RFLAN 60, I even managed to get this hilarious selfie with him! The response from attendees was so great that we now have a :gasp: emoji on our Discord server and a ‘rflanHarryChamp’ in our twitch emojis, quite frankly, some of the regular members in the Discord server have been using that emoji so hopefully on future events, we can add more great custom emojis! – Harry (Media Team)

Competition for parking and overflowing.

Prior to the event on Facebook, we have informed all attendees of the of the extra carpark over at the other side of the Stadium in case of overflow but I feel that it was insufficient and very short notice, I do apologize to those who lost a lot of time looking for a space when they can be playing games instead. Hopefully, we’ll have access to that car park again for RFLAN 61 and do a better job informing all the attendees before the event and have some clear signage during the event. – Harry (Media Team)

Perhaps a better system for checking  tickets. Maybe a little sticker that goes on your PC case or something? It was annoying getting hassled so often.

In the past, we have used wristbands, but this event we upgraded to more stylish lanyards. We’re very happy with the success of this change albeit with a few minor hiccups aka – people using their tickets to get friends in. We will always have people trying to jip the system but we try our best to keep some kind of structure towards our tactics. Harassing people was never on our agenda and we apologise to those that felt this was the case. We will seek out other methods to check tickets because, like everyone that tries something new, we learn from peoples feedback on the ideas and choices we make. – Nathan (Red Team)

The competition layouts for pubg.

The pre-organized entry into the tournaments.

We are actually super happy with how the new structure went in terms of PUBG. The last event saw many tournaments being delayed and even tournaments being cancelled due to lanners not being available. Splitting the tournament qualifying brackets into Morning, Afternoon and Evening qualifiers allowed lanners to better plan their day/tournaments depending on when they would be available. This was done without reducing the size or play time from previous events. As you can imagine, scheduling 28 separate tournaments is no easy feat and impossible to do without some conflicts but unfortunately these are unavoidable so provide as many tournament opportunities as we can for all different types of gamers.

We also opened up tournament registrations roughly a week before the event so attendees had time to look through the schedule and work out which tournaments they would like to compete in before the event. This was generally well appreciated. – Liam (Games Team)

3rd person pubg not 1st person, and have fortnite tournament

As many of you will know especially given the poll we gave to our lanners pre-event, the majority of PUBG players far prefer First Person Perspective for competitive play. Due to the results of the poll, we changed our headlining PUBG tournaments to FPP, however, we created two new tournaments, PUBG WAR DUO’s and PUBG WAR SQUAD’s in Third Person Perspective to balance this.

We have also noticed and taken on board the massive popularity of Fortnite and as soon as they facilitate the creation of private custom servers that lanners can join, be assured we will have some tournaments sorted for you! I’m hoping that if they release the functionality soon, we might see it at RF61 otherwise it might be RF62. – Liam Hill

Much more professionally done this time, GG. Lanyards are MUCH better. Discord was managed far better this time. Plus I didn’t have a single network of power issue which I usually end up having, so thank you!

Thank you very much for the feedback! We radically changed some of our internal processes and procedures this event and we feel it has paid off. We too love the lanyards and we hope lanners keep them as mementoes of their awesome experience at RFLAN.

We did have a very small interruption to power and network on two occasions but thanks to good planning, we managed to restore power and replace the failed device in less than 10 minutes. – Tim (Infrastructure, Sponsorship & Marketing)

Internet speed and venue. The new lanyard sign-in was great too – no more catching my wrist hairs!

I absolutely used to hate it when it came time to pull my wristband off… RIP arm hairs. – Hairy Admin

Some more warm food options that are vegetarian/vegan friendly

The canteen had a supply of vegetarian hot foods this event including pasties and spinach and ricotta rolls. They were available right through to Sunday morning. The Get Chips or Die Frying food truck also sold vegetarian and vegan-friendly food. – Reyhan (Canteen)

Our second food truck for lunch and dinner had to pull out due to a family emergency. Canteen options were actually more varied than usual with more hot food flavours.

Perhaps we will send out a poll in the coming weeks to see what attendees are actually wanting in the canteen and if those are viable options for an addition to the menu. – Reyhan (Canteen)